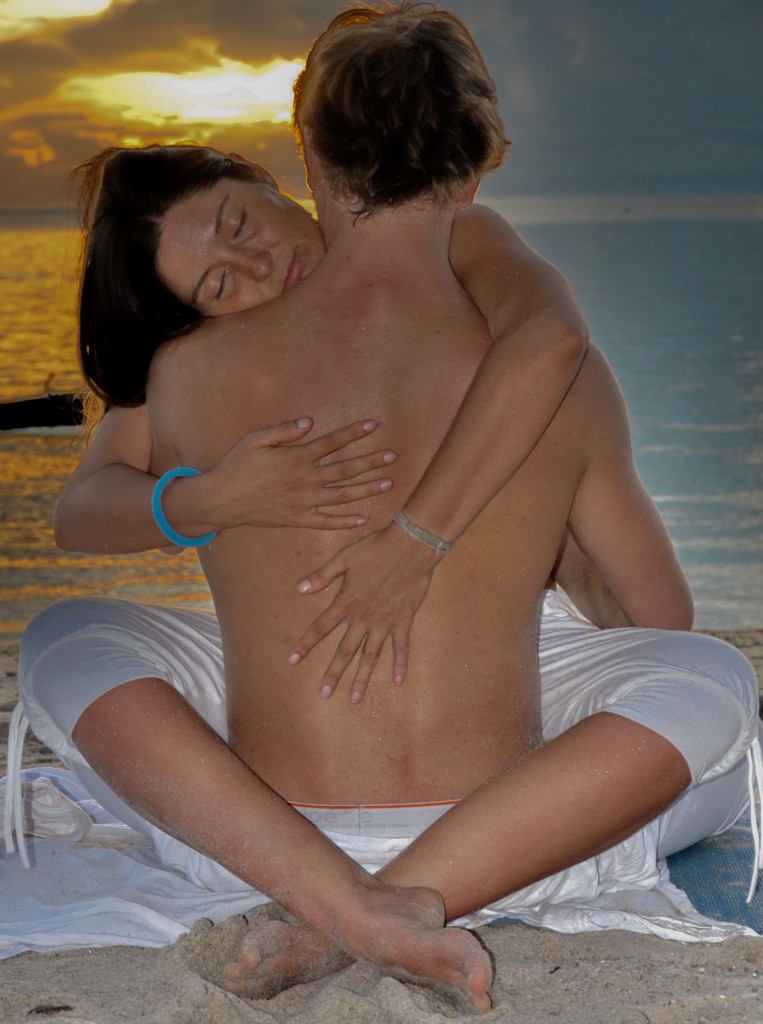 According to Tantra, the human being is a miniature universe; what is found in the cosmos can be found within each being, and the same principles that apply to the universe apply to humans. The universe is a manifestation of the whole, which is one and two at a time. Shiva is the permanent part, the male, while Shakti is the dynamic creative side, the female. The two coexist eternally within us and outside us. The goal of a Tantric practitioner is to someday bring what is different and the same at once.

There are several variations on Tantra yoga and a complex range of methods and techniques, among them, sexual practices that in addition to giving physical pleasure, can accelerate spiritual evolution. Tantra is a practical philosophy that does not consider the body as sin, but rather, as something real that besides giving pleasure can lead us to achieve Samadhi, the union with the Universe.

The female aspect is called Shakti and the male, Shiva. In the sexual, physical, and emotional connection of opposite sexes there is the union of Shiva and Shakti. The energy that is generated during sex, when sublimated, can lead to profound experiences, even to Samadhi. On a deeper level, there is a connection of Shakti and Shiva when the micro-cosmos that each one of us is (Shakti), connects with the macro-cosmos, the Wholeness.

In Tantra, we work with transmutation and sublimation, converting lower energies to higher energies, and sending them to different parts of the body where they are required, mostly from the lower chakras to the higher chakras.

Imagine a huge solar panel on a sunny day. When the sun’s rays fall on the panel, the solar energy is converted into energy that can be used in different parts of the house. This energy changes depending on what is required; it heats the water, maintains the air conditioning working or charges a mobile phone. This is transmutation, the transformation of energy into another. The flow of energy throughout the house is sublimation, the process of taking energy from one place to another, usually from lower to higher chakras through sushumna, ida, and pingala.

In Tantra, we utilize asanas, pranayamas, bandhas, mudras, and other techniques to acquire and filter energy from our exterior and interior worlds and channel it throughout the body.

In a class of Tantra yoga, in combination with Hatha and Kundalini yoga, there is an order in the sequence of techniques to cleanse, refine, balance, and sublimate energies more efficiently.

According to a branch of Tantra called Kashmir Shaivism, one night, Vasugupta, a sage who is believed to have lived during the second half of the eighth century, had a dream in which Shiva appeared instructing him to visit a nearby mountain where he would find 77 sutras (aphorisms, poems which express a great idea in a few words) inscribed on a rock. When he woke up, he went to the mountain where he found the sutras, which revealed a path to total liberation (samadhi) through a philosophy and practice called Tantra. The text covers these aphorisms known as the Shiva Sütras of Vasugupta, one of the basic texts of Tantra. But there are different forms of Tantra, such as Hindu, Tibetan and Buddhist Tantra, like there are also several Tantric texts. Some scholars believe Tantra yoga originated in the Indus Valley between 3,000 and 5,000 years ago, at the same time The Vedas, the oldest sacred texts of Sanskrit literature, were written. Another well-known text is  Mahanirvana Tantra (Tantra of the Great Liberation).

The word “tantra” is derived from the combination of two words: tattva and mantra.

The tattvas are the five elements that make up our physical world and shape our experience, including our physical bodies. These are: earth, water, fire, air, and ether. Everyone has a dominant tattva or element, which is expressed most strongly in our constitution and personality. Imbalances in the tattvas are the cause of many of our ailments. One of the goals in Tantra is to balance these elements, relating the first five chakras with the five elements. So Muladhara’s element is earth; Swadhisthana’s is water; Manipura’s, fire; Anahata’s, air; and Vishuda’s, ether. The two upper chakras, Ajña and Sahasrara, are above the elements. A person, who spends too much time thinking, can have much air and little earth. So this person would benefit practicing techniques related to Muladhara.

Mantra is a syllable, word, or group of words. You can read more about the meaning of mantras further down in Mantra Yoga.