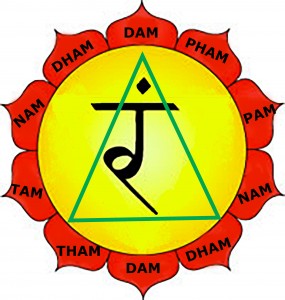 Manipura is the third energy center. The animal aspect is not as dominant as in the first two centers, which are preoccupied with survival and reproduction. But still, there is a lot in common with the rest of the animals, like the love for power, the desire for domination, such as it is observed in the lion fighting to become the leader of the pride.

Manipura is found two finger breadths below the navel, in the subtle body, and it is in charge of the organs in the abdominal area. Fire is its element. It controls the fire of the digestive system as well as the fire of the personality of the individual. Manipura also supplies energy to our locomotive system, the ability to move from one place to another, which humans either have or lack, and the legs are part of its territory. Equally important are the eyes, since vision is the dominant sensory organ in Manipura. Mentally and emotionally, Manipura energizes the strength of will, bravery, audacity, and effort. If its energy is at a low level, the results can be weakness, shame, laziness, or cowardice; if its energy is unbalanced or uncontrolled, one may suffer from anger, violent tendencies, or roughness.

When the energy is balanced, there may be dashing bravery, courage, impetus, and daring, all of which can be used either for good or for evil, and for that which is beyond good and evil.

An example of someone in Manipura would be Alexander the Great, fighting for his ideals at the front of his army, not like the present day leaders, who just send others to die for them. Someone strong in Manipura may try to dominate in a relationship, and it is that person in the group that likes to make decisions, that person on which others depend. Someone in Manipura practices action sports and has a high self-esteem, which, if allowed to go unbalanced, may degenerate to vanity.

The triangle is the geometric figure that represents Manipura, and the ram with its large horns, in the offensive posture, is the representative animal.