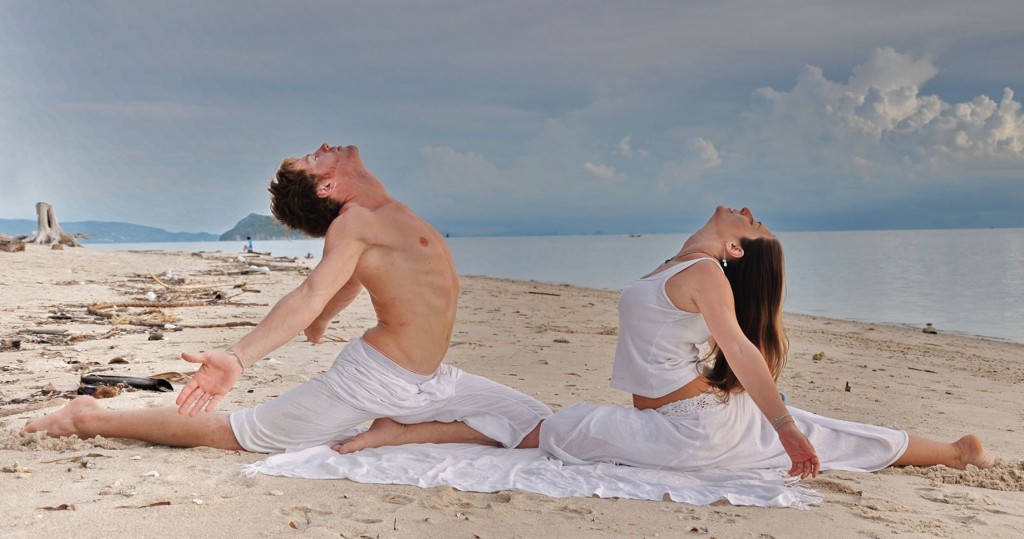 There aren’t that many people interested in yoga who have not heard the word Hatha yoga. All these new forms and schools of yoga like hot yoga, aerobic yoga, power yoga, and asanas competitions are taking the asanas from the Hatha yoga system. In many of these cases, the true yoga philosophy isn’t part of the curriculum. They practice so-called yoga to work out, do gymnastics on the floor, in the air, and even on top of horses and surfing tables.

Indeed, exercise is very important in so many ways. If you like surfing, and you like the challenge of doing the poses on the table, or are attracted to the excitement of the aerial poses, then do them, and take full advantage of a teacher with adequate knowledge and experience. But one day, try going inside you, living the posture, forgetting where you are, experiencing different feelings, where the pose is not the end but a means to something much bigger. That day you will be doing Hatha yoga.

But then, what is Hatha yoga?

Hatha yoga is the yoga that helps us gain control of our body and energy, while it strengthens our bodies through asanas, pranayamas, mudras, bandhas and cleansing techniques.

Hatha yoga is also the practice of harmonizing and balancing the bipolarity of our being. The word hatha is divided in two words: ha represents the power of the sun, while tha represents the energy of the moon. A human being has its lunar side, the feminine, which is the negative side, and its solar side, the masculine, which is the positive side. But it’s not a matter of one side being the good one and the other the bad one.  As a battery has two poles, not in the sense of one being better than the other, but of opposites working together to provide energy, so do humans have a bipolarity. Every man and woman has a bipolarity to a greater or lesser degree, although generally, women tend to have more lunar qualities and men more solar ones. Without the negative pole, the positive pole of a human being does not work, and vice versa. An imbalance of these energies unbalances the whole system.

In Hatha yoga, we harmonize our energies using techniques, such as Pranayama Viloma Anuloma, breathing with specific rhythms on alternate sides of the nose, using specific bandhas. This technique balances the practitioner on physical, mental, and emotional levels. It is perhaps the best pranayama to balance our sixth sense, Ajña, the third eye chakra, very good also for people with mental conditions like bipolar disorder.