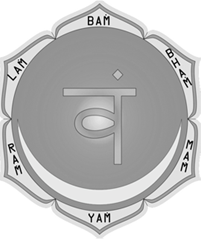 Water is the Swadhisthana element.  It is in water that life is created, and this is the chakra of reproduction, sensuality, and sexuality.

Water predominates in our physical bodies. Newborns are 85% water by weight, adults 70%, and old people 60%. The Moon influences water. We see the tidal ups and downs several times a day, caused mainly by the gravitational pull of the Moon. For this reason, and others, the Moon has a great influence on Swadhisthana and, as you can see, it is part of its yantra.

The animal that represents Swadhisthana is Makara, the crocodile. The cat could also represent Swadhisthana.  Both animals are sensual, with sinuous movements, and both can be very cruel. But Makara, the crocodile, is the symbol due to its being an aquatic animal, since water is the Swadhisthana element.  To be fashionable, the Reggaeton dance, the sound of the trumpet, and the celebration of large festivities where there is abundant liquor, drugs, loud music, uninhibited behavior, sexuality, and sensuality are all typical of Swadhisthana.

A person with low libido certainly needs to develop the Swadhisthana energy, and a rapist probably needs to balance or sublimate such energy. Jealousy and frequent depression can also be addressed by strengthening Swadhisthana.

Swadhisthana also influences creativity and imagination. Its symbol is the waxing moon. Tasting is the dominant sense, since the tongue is the preponderant sense.  The genital organs are the dominant organs of action. Thus, activities related to sexuality, reproduction, and sensuality are the ones that develop karma at Swadhisthana level.