In Sanskrit, bandha means to lock, to hold, to contract, or to tighten. Yoga bandhas play an integral part in yoga, enhancing and intensifying the practice of asanas and pranayamas. They involve the contraction or squeezing of muscles in a specific part of the body. The goal of holding the bandhas is to awaken, build up, and control the energy from the first center of energy (muladhara chakra) to the fifth center of energy (vishuddha chakra). When the bandha is released, the energy flows powerfully through the body with an increased pressure, maximizing the energy directed to specific areas. Bandhas are powerful techniques that can lead to the awakening of kundalini.

There are three muscular locks called Jalandhara Bandha, Uddiyana Bandha and Mula Bandha which work in three muscle groups: cervical (neck) muscles, abdominal muscles, and perineal muscles. Mula Bandha is the conscious, willful contraction of the cervix (perineal muscles), Uddiyana Bandha of the solar plexus (abdominal muscles) and Jalandhara Bandha of the throat (cervical muscles). When we combine these three bandhas together, we have Maha Bandha, the great lock (maha means great in Sanskrit). 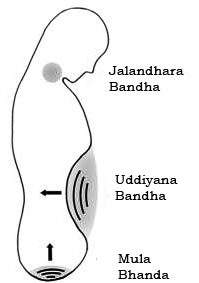 Bandhas are much more than mere locks. By constricting a certain part of the body, bandhas re-direct the flow of blood and lymph to other parts. Contraction of these muscles affects the nervous, circulatory, respiratory, endocrine, and energy systems. By unlocking and contracting certain muscles on the physical level, a subtle process of unlocking goes on simultaneously at the mental and energetic levels. Bandhas (especially mula bandha) block the descending movement of consciousness and redirect it upwards.

An analogy with a dam has been used to explain the effects of bandhas. The same way a dam wall locks, stops, obstructs and redirects the power of a dam, the energy (physical, mental, and psychic) is centralized and focused at the spot of contraction so that this energy can be redirected for useful work as desired by the practitioner. These areas are permeated with a fresh and vital force capable of checking and restoring to health imbalances in the body systems.

Bandhas are also removers of locks and blockages in the form of physical and mental impurities. Traditionally bandhas were prescribed as one of the most effective ways of untying knots and blockages that create tension, anxiety, and unresolved conflicts.

In Mula Bandha, The Master Key, Swami Buddhananda writes:
“The force generated from the bandhas may be likened to that of increased pressure in a tube. Imagine a piece of tubing resting vertically to the ground. This tube represents sushumna nadi (the main pranic energy channel which runs up the spine).
1. Moola bandha represents the sealing of the lowest portion of the tube, thus preventing the downward motion of the prana. It stimulates energy into mooladhara, awakening kundalini Shakti.
2. Jalandhara bandha seals off the top portion of the tube. Prana is now locked within the tube.
3. Uddiyana bandha completes maha bandha. It further increases pranic pressure by stimulating the solar plexus (manipura chakra), filling and expanding the closed tube.” 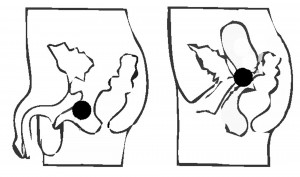 In Sanskrit mula means root, firmly fixed, source or cause, and thus mula bandha is known as the root lock, the perineal contraction. Mula bandha also refers to the contraction of muladhara chakra, the seat of Kundalini. By controlling muladhara chakra, the practitioner makes sure to control the inferior energies, not developing low-quality aspects. Mula Bandha also provides core strength by supporting and stabilizing the spine, which can contribute to the prevention and improvement of back pain.

Mula Bandha stimulates the pelvic nerves, the genital system, the endocrine system, and the excretory system. It can also help to relieve constipation and depression. 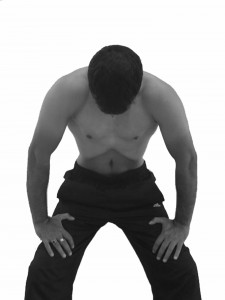 Uddiyana can be translated from Sanskrit into the path of upward flight, to fly upward, or to rise up. By contracting the muscles in uddiyana bandha, we elevate and sublimate the inferior energies towards the superior levels of our being.

In Hatha Yoga Pradipika, it is described as follows:
“Uddiyana is so called by the Yogis, because by its practice the Prana (vayu), flies (flows) in the Sushumna. Uddiyana is so called, because the great bird, Prana, tied to it, flies without being fatigued…” (H.Y.P., 3.54-55)

To practice uddiyana bandha, stand with your legs one foot apart, with the soles parallel. Bend your knees, lean a bit forward and place your palms on your thighs above the knees, with your elbows slightly bent, supporting all the weight of the trunk on the arms. Inhale and perform a deep exhalation, bending down even more, expelling all the air from your lungs. After exhaling, come back to the starting position, performing a “mock inhalation” (expanding your rib cage, as if you were inhaling, but not actually inhaling), drawing the abdominal muscles inwards and upwards towards your spine, causing the diaphragm to rise. Maintain this position for a short time at the beginning and gradually increase the void retention. Release the bandha, allowing the abdominal area to return to its normal position. Then and only then, inhale slowly and stay in retention as long as comfortable, concentrating in continuing the transmutation process. Repeat the process a few times at first and then you can do it for longer times.

During pranayamas, like in Anuloma Viloma, this bandha is practiced in the sitting position. It must always be practiced on an empty stomach, whether you are doing it on a sitting or standing position.

Uddiyana bandha activates manipura chakra, the solar plexus and improves all functions related to that energy center. It tones the abdominal muscles and eliminates toxins of the digestive tract, strengthening the digestive fire and toning the body’s energetic core. The abdominal organs are massaged, toned, and purified and the adrenal glands are balanced by the abdominal contraction. Uddiyana bandha stimulates intestinal activity and helps relieve constipation. It also stimulates the pancreas and is helpful for diabetes. This powerful bandha has an effect on the heart and improves circulation of blood throughout the body. It strengthens the immune system, balances the mind, gives inner strength, soothes irritability and anger, and dispels depressive moods, stress, and tension. It is almost impossible to be depressed after a ten minutes practice of uddiyana bandha.

Uddiyana bandha is contraindicated if suffering from abdominal diseases which are at a phase of acute crises.

Uddiyana bandha is called the best of bandhas in the Hatha Yoga Pradikipa. 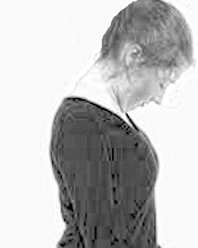 The Sanskrit word jala means net, dhara means stream or flow, jal, means throat, and adhara means base. Thus, Jalandhara bandha can be considered the throat lock that controls the flow of prana (the flow of energy) in the network of the neck.

Jalandhara bandha is described in the Hatha Yoga Pradipika as follows:
“69. Contract the throat and press the chin firmly against the chest. This is called Jalandhara Bandha, which destroys old age and death.
70. It stops the opening (hole) of the group of Nadis, through which the juice from the sky (from the Soma or Chandra in the brain) falls down. It is, therefore, called the Jalandhara Bandha — the destroyer of a host of diseases of the throat.
71. In Jalandhara Bandha, the indications of a perfect contraction of throat are, that the nectar does not fall into the fire (the Surya situated in the navel), and the air is not disturbed.” (H.Y.P.,3. 69-71)

Unlike the first two, Jalandhara Bandha is rarely done on its own, and it is usually performed in combination with specific pranayamas, after the complete yogic breath, in breath retention. It is also naturally engaged in semi-inverted and inverted asanas such as, sharvangasana, halasana and sethubandhasana.

Jalandhara bandha is immensely powerful, compressing the sinuses on the main arteries of the neck, regulating the circulatory and respiratory systems. The pressure on the throat helps to balance the thyroid and metabolism. It promotes mental relaxation and relieves stress and anger.

The practice of Jalandhara bandha opens up the throat chakra (Vishuddha). It clears the nasal passages, refreshes the brain, nourishes the heart, removes tensions from the neck, relieves sinusitis, headaches and insomnia, and strengthens the vocal cords. Jalandhara bandha regulates the flow of blood and prana (energy) to the heart, head, and the endocrine glands in the neck. It is beneficial for throat diseases, improves the blood pressure, and regulates thyroid functions.

Bandhas are advanced practices and should be attempted only under guidance of an advanced and competent yoga teacher.