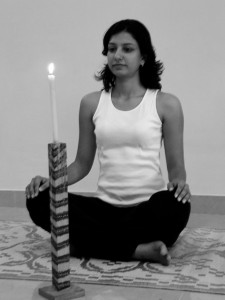 Trataka is a cleansing technique. In Gheranda Samhita (1:53), it is described as “a fixed stare without blinking at a small object until the eyes begin to tear. This technique is called trataka by the wise”.

Trataka means looking steadily at a fixed point. There are two kinds of trataka, internal and external. In internal trataka, the eyes are kept closed and the practitioner focuses on a symbol, a point of inner light or a body part, like the heart. There is a special internal trataka which yogic tradition asserts burns karma. In external trataka, the object of the gaze can be the flame of a candle, a small black spot on the wall, a yantra, the point between the eyebrows, the early morning sun, or the moon. The purpose of trataka is that the mind concentrates on a single point and sets aside all distractions.

Trataka purifies the eyes, strengthens the eye muscles, and improves vision. It fortifies concentration, sharpens memory, and develops intuition, the ability to visualize, and willpower. Trataka also invigorates the faculties of Ajña, the third eye.

It is said that one who practices trataka with discipline develops extrasensory perception and clairvoyance.