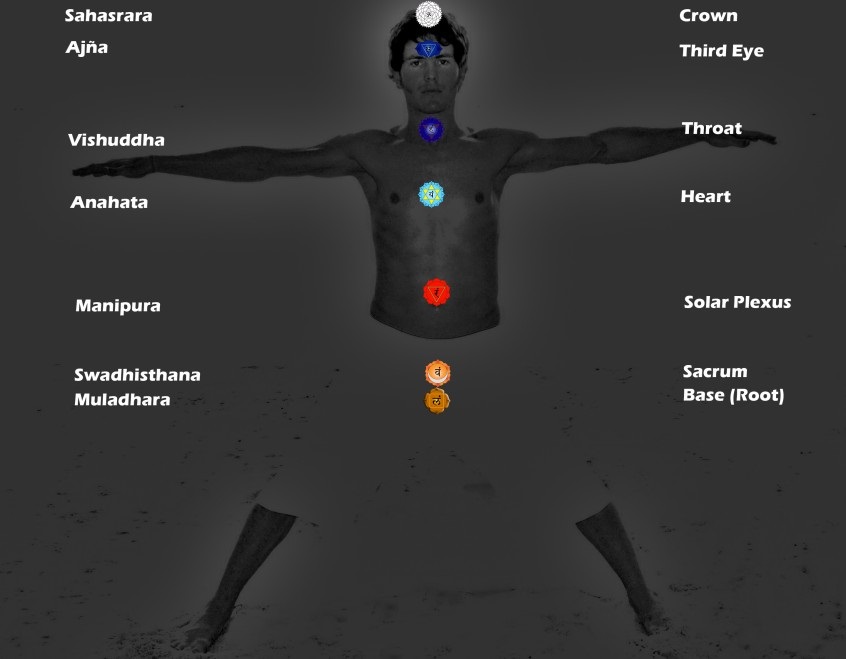 The chakras are consciousness and energy centers which process, transform, and distribute the energy in our bodies.  There are seven main chakras, aligned in a vertical axis corresponding to our spinal column, starting with Muladhara at the base of the spine and going up to the last chakra which is located above the head, Sahasrara.  Each chakra controls specific zones of the physical, emotional, mental, and “spiritual-energetic”* bodies.

Each of the first five chakras corresponds to one of the five elements, which we know as Earth, Water, Fire, Air, and Akasha.  Akasha is translated from Sanskrit as space, or ether, and it is the most subtle of the elements.  Muladhara represents solidity (earth); Swadhisthana represents fluidity (water); Manipura represents the gaseous (fire); Anahata represents the aerial (air), and Vishuddha the ether, or space.  The other two chakras, Ajña and Sahasrara, are above the elements.  Ajña works with intuition, what some call the sixth sense, with intelligence, and with our mental powers, that large unused part of our brain. Sahasrara connects us with the Universe, the Wholeness, the most sublime.

There are specific meditations, asanas, pranayamas, kriyas, bhandas, mudras and other yoga practices, for working with each chakra: for cleansing them, removing blockages, for charging them with energy, and for transfiguring and sublimating their energies to other chakras.

Muladhara, Swadhisthana, and Manipura control the physical body. Anahata and Vishuddha, the astral body. Ajña controls the mental body, and Sahasrara controls the causal body, that which is capable of evolving into the totality of the world.

Most people have a prominent chakra, maybe two, which can be balanced or unblocked, or not.

Most people dwell in Swashisthana. A small percentage dwell in Manipura and Muladhara. An even smaller percentage in Anahata. And fewer still in Vishuddha. Only a very few in Ajña, and a precious few in Sahasrara.

Mother Theresa of Calcutta could be seen as an example of a person with a well-developed and balanced Anahata.  General Pinochet could have been a person with a very strong but highly unbalanced Manipura; the petals of his Anahata were probably wilted.

It is worth pointing out that the chakras are not found in the physical body, they are found in the subtle body.  If one would cut open a body, one would not find these energy centers.  They embody the vital energy, beyond the physical energy, which our instruments cannot yet detect.  Yet, one can feel this energy very strongly.  After doing Sharvangasana, an asana for working with Vishuddha, in the throat area, I feel my neck growing larger as if I were a toad.  I feel that area reach a gigantic size, charged to the fullest.  The sensations which I get from the chakras, experimenting with each one of them, and living the results of these practices are some of the aspects of yoga which I find most captivating.

* spiritual-energetic:  According to astrophysicists, every atom in your body, the calcium in your bones, the carbon in your genes, the iron in your blood, your shoes, each stone, flower, animal, bacterium, building, ocean, everything we touch and feel with our five senses was inside a star billions of years ago, with the exception of hydrogen and other elements created before the formation of stars, right after the Big Bang. We live because stars died.

The physical continues to live in one way or another. When I speak of spiritual-energetic I am speaking of something else, something that is not bound to the rigors of time and space, where everybody has occupied, occupies, and will occupy a specific place at different times.

That spiritual-energetic is also the guardian of memories and feelings, which despite arising from physical processes, become an integral part of that energy and have nothing to do with electromagnetic energy, the energy of electrons or quarks.  It is not detected by any machine.  It is bound to our bodies, yet it does not occupy space and is not limited by time. For this entity, the present, past, and future are simultaneous, they exist at the same time. Even then, it can still dwell in each moment and feel a sadness, full of tears, or a contagious laughter. But because it is not physical, it is not subject to the laws of physics, so it does not become part of the transformation of matter. It was not part of a star, nor will it be cremated, buried, or eaten by the worms.

So, when you see this term, spiritual-energetic, it does not matter what your beliefs are, you know that I refer to that which survives physical death. If you think that nothing survives, but that matter continues the process of transformation, well, it is that too.